In the first installment of Jobs I Didn’t Get, Tessa subjected herself to the frankly alarming audition processes of a reality TV contestant and a Disney Princess. If you thought part two would be less bizarre, you were wrong. Oh, so very wrong.

It is a closely guarded/widely known secret that I was a cheerleader at university. A proper competitive, flipping, throwing, Chinese human pyramid cheerleader on a squad that were national champions, but still, a cheerleader and my joy at being one was matched only by my shame.

Pineapple is the London dance studio that made Louie Spence famous. These are their cheerleaders. ‘What a lot of hair’ you’re thinking, and you’d be right, but they go to parties and make £200 a night and I hadn’t seen those photos when I showed up at the auditions. It was quickly apparent that neither much throwing nor many clothes would be involved, but I was poor so I stayed.

The two captains were working a sort of ‘good captain, bad captain’ routine. The kind one beamed, the mean one beamed as well, but with a sort of psychotic edge and eyes that said exactly what she thought of my hair (which I know was ‘limp’ because she later also said it with her mouth).

I made it through round after horrifying round. Every time I went to get my stuff to leave they called my number and asked me to stay. In the Flexibility Test they wanted to see the splits with the right leg forward which on me looks not unlike standing. A girl further up the line explained she had a knee injury and they passed on without question. I feigned an injury and they turned on me. ‘What kind of injury?’ the mean one wanted to know. ‘Hamstring? ‘I hazarded (I’m not even totally sure where the hamstring is) ‘Well how long will it take to heal?’ ‘…two weeks?’ I mumbled. They wrote it down.

In the Party Round they circled the room as we pretended we were at a party. ‘Obviously don’t worry, but if you can do a bit of an American accent that’s great’ beamed the mean captain. ‘Sure’. I stared her down ‘any particular state?’ 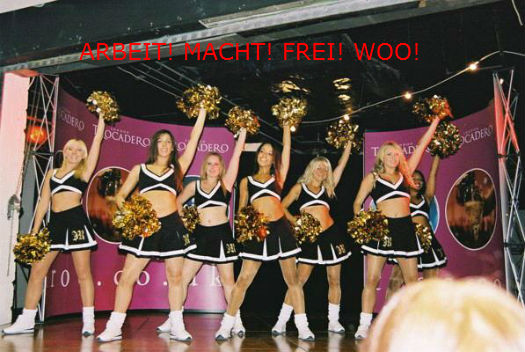 Based largely I believe on the merit of being blonde, they called me in at the end and told me they’d like me to be part of the squad. ‘We just want to check that you’ll be okay with having bare arms and a bare midriff’ they asked. I gripped the table. Bare arms? ‘Oh sure yeah, fine, hahahaha who has a problem with their arms?! Not me!’ I cried manically. The mean one steepled her fingers, ‘Don’t worry, we think you look great. I’m sure you’re just carrying a few extra pounds after your hamstring injury, they’ll drop right off’.

Two weeks later I received an email telling me to come in for the squad photo shoot. I should be sure to bring my American Tan tights (shiny), gold eyeshadow, grey eyeshadow, eyeliner, mascara, false eyelashes, hair extensions, pink, peach and red lip gloss, blusher, bronzer, curlers and straighteners, and have curled and styled my hair in keeping with ‘the Pineapple look’.  In a panic I drove to a friend’s house, she loaded me down with equipment, most of which I had never seen before, and I set off for the studio, where I ran into the changing rooms and spent two hours trying to curl my hair. I eventually went upstairs, my hair enormous, my face cracking under the weight of make up. I came through the door and the tiny kind captain ran over. ‘Oh God! She cried, ‘You need to start on your hair and make up as quick as you can!’ ‘Right away!’ I said, giving her the thumbs up and went to hide in a corner.

I approached the one with the biggest hair. ‘Oh God! Do you need help?’ she cried before I could say anything. I really did and I submitted willingly to this kindly Samaritan, but despite her best efforts my hair refused to curl and she was forced to resort to hundreds of tiny ringlets so I looked like Charles II.

Her name was called to have her photo taken. ‘Don’t worry!’ She assured me and ran round picking human hair off the floor, ‘Put these in!’ and she trotted off. I inspected the piles of blonde curls in my lap for a clue as to how they might work and eventually stuck them on my scalp. I used them all until my hair was a white blonde explosion of curls. I shook it gently and it moved like it was alive, I felt fabulous. I stood in the line to have my photo taken; American Tan tights (shiny), thick white socks, breasts to my chin, huge hair. The photographer, a languid man with a goatee, turned and pointed – ‘You!’ He snapped his fingers, ‘Dolly Parton!’ ‘Yes? I beamed, bursting with pride. ‘Not a compliment. Someone get those things off her head!’  Concerned girls descended and led me away like an invalid. ‘They go more sort of under your hair’ one of them whispered.

Eventually, I made it onto the white sheet to have my photograph taken. ‘Tight tummy,’ the languid man barked, ‘tight tummy, Tight Tummy! Tight Tumm…is that it?’ I nodded, unable to breathe. He shrugged and muttered something that sounded like ‘Photoshop’.

Event type: cricket tournament this year in Oxford, 6 cheerleaders to cheer during the games + mascot (bull)

would you be interested in this job as the mascot? x

The actual figure makers at Madame Tussaud’s have famously all gone mad from spending four months sticking individual strands of hair on Madonna, so they have to employ actors to repeatedly stir some wax in the display room and pretend they’re scientists. Equipped with a degree in Anthropology, pretending to be a scientist sounded right up my street so I went along to the auditions and ticked that I was also keen to dance in the Andy Warhol exhibition.

Turns out that to be a Wax Scientist you also have to be a member of the Scare Team and work half the week in the Chamber of Horrors. I thought I could probably manage that, so 30 serious actors and I stood in a warehouse and watched a video of the Madame Tussaud’s Scare Experience – Scream: One Way Out. The actors nodded along and thought about what they would bring to the character, I watched open mouthed with my hands to my face because it was the Scariest thing I Had Ever Seen.

Tourists descend in a lift to a ‘Maximum Security Psychiatric Prison’ where a prison guard leads them on a tour. It’s your average holiday tour of a working prison until a riot starts somewhere in the darkness, the guard gets shanked, a blood stained hand comes out of the shadows and drags his body away and with his dying breath he whispers ‘run…’. Then the prisoners all break free and the audience (or Screamers) have to run through the prison chased by the deranged and blood splattered inmates. ‘Sometimes the public don’t understand it’s pretend’ chuckled Roger, our Scream Team leader, ‘so that’s always fun.’ Is it Roger? I thought, because it looks terrifying to me. 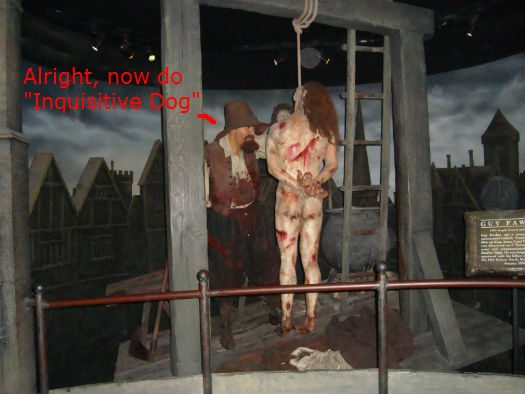 We played some horrible warm up games and then we were called out in groups to pretend to be an animal. Any animal. Walk around and when I say five, you’re fully human, but four, you’re mostly human with a bit of animal and when I say zero you’re fully your animal. The actors leapt about and slapped themselves with excitement. I couldn’t decide if I wanted to be a wolf or a gorilla and wan’t completely sure even by the time I was walking round and they were saying ‘three, three, there’s quite a lot of animal now’. By the time it was zero I was a wolf but I’d forgotten how to howl and just could not commit incase the noise came out wrong. I was facing some problems, what with not actually being a wolf and all, whether to move on my hands and feet or hands and knees. As I was deciding just to sit on my haunches and do Suspicious Wolf Eyes, I was attacked by a snake and defended by a parrot, and I was jumping to the fray at ally with what I thought might be a manx cat, they called time and changed the game. The lights turned red. the room got weirdly hot and a club remix of a woman screaming started on the surround sound speakers. Now we had to be the scariest thing we could think of and heavens can actors access some dark places. Clothes were being ripped off everywhere, people were scratching at their skin, clawing at the walls. I can’t remember what I did but I distinctly remember taking off my cardigan.

In the break I went to ask one of the team leaders whether there was any chance of just being a wax scientist. There wasn’t. ‘Sometimes,’ I said, ‘aren’t you sitting there in the dark, in your little cell, covered in blood wearing a prison uniform, holding a shank, and you start thinking ‘maybe I’m not an actor at all, maybe I’m actually in a maximum security psychiatric prison but I think I’m an actor because I’m a delusional schizophrenic?” He gave me a searching look. ‘I don’t think this is for you is it?’ We agreed it wasn’t and I went home.