Very Smart Man Has Other Problem

You might think that, if you were me, you wouldn’t have my problems: but you would. You might think that, if you were one of the smartest, if not the smartest man in the early to mid-twentieth century, you would make brain-hay while the sun shines. You would use your nimble mind to do what was asked of you, without question, and you wouldn’t get yourself into all the trouble that I seem to. You wouldn’t, because you couldn’t. I am a Very Smart Man, and I have One Other Problem.

As the only Very Smart Boy in my school, I was jeered at and bullied, and twice I was held upside down by my ankles into a blazing furnace. “Hey egghead!” my school chums would say, their scorching burns mingling terribly with my kneecaps, which had just been smashed in with rounded clubs “why not solve this, Einstein!”

“There’s nothing to solve,” I said, weeping, in a way that was both prodigious and shockingly ahead of its time “there’s no theorem in brutality.”

The joke was on them though, because my first academic paper, The Theorem in Brutality, was published by the Harvard University Press when I was just eleven years old. When the Emperor of Harvard came to see me at my school he found me under a library floorboard, where I lived during the Christmas and summer holidays.

“There must be some kind of mistake,” said the Emperor “is it perhaps, your father?”

“The only theorem my father knows, sir” I said, in a moment of comic relief “is at the bottom of a glass.”

I’m not very good with people and I fundamentally don’t understand jokes, so while I wasn’t sure this made complete sense it still moved the plot along nicely.

After emptying out my floorboard I accompanied the Emperor of Harvard to Harvard, where I rendered some of the greatest minds in the world both irrelevant and backward. It was here where my One Other Problem started to hold me back, which most people will have figured out by now due to the appropriate foreshadowing in earlier scenes where I abruptly left the room or kissed a man or stabbed a dog in its measly head.

“The Problem with you,” said my One Best Friend, who is either gay or imaginary or secretly hates me. “Is that you’re so busy deducing life that you are not living life.”

“I am living life,” I protested, evading the fact that my One Best Friend doesn’t even know what my Problem is. “I have my hotplate and my theorems and my blank stares out of campus windows. What more does a young genius need?” 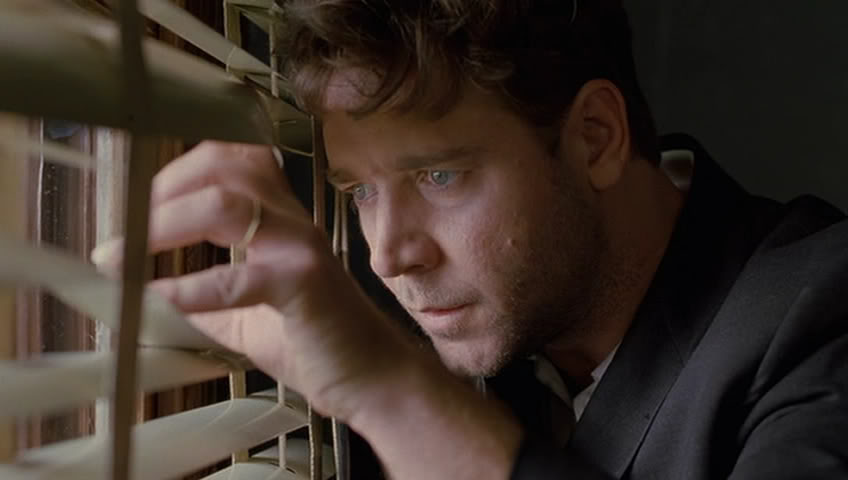 Love. Love is what a young genius needs.

I didn’t notice her at first, of course, not with my thoughts and singed hotplate, but when I did, I was never the same. She breezed into my life airily, joyfully, like a spring day with rocking tits. She was wearing the kind of dress that makes a man say, “ah, I forgot this movie was set in the fifties.”

“Are you the man who wrote this paper?” she said breathily, brandishing one of my older brilliant works that, while brilliant by a normal genius’s standards, supported a theory that I had already become bored of.

“I simply had to meet you.”

“Well, you simply must be going.” Haha. This is a joke me and her still tell, the way I was rude to her when we first met, but she understands because she gets that I am a Very Smart Man with One Other Problem.

Her face crumpled like an attractive newspaper from 1955, which is when these events took place. Look, her hair is doing that sausage roll thing.

“No cry,” I pleaded uncomfortably, one eye sneaking back to my theorems “please don’t cry, woman.” I made her a cup of tea on my hotplate. “You see, you’re the first woman I have met, and certainly the first one to have read and understand my work.”

(It transpired later that while she understood some of my work to a basic level of competency, she did not understand all of it, and still struggles to understand why I struggle with my genius, as I do on the daily.)

We married shortly after, and although she expressed a great capacity for Advanced Mathematics in earlier scenes, she seems to have completely lost interest now, and is forever bothering me with her complaints about the needs of our tiny, hideous baby. Despite my great efforts at romance, such as pointing at the stars with her or forcing her to type my correspondence, she seems disheartened by my need to work 28 hours a day and is still talking about that time I almost killed our tiny, hideous baby.

“The baby is not logical,” I say, because I still have that Other Problem that makes me say things like this. “The baby is a remainder that needs to be carried over.”

It is around this time that I discovered a separate dimension where only numbers live. No one believes me yet.

“What if the numbers lived on their own somewhere,” I postulate to Emperor Harvard, now Old as Shit. “And what if humans could go there.”

“You’re crazy. How would the numbers even get there? You’ve lost it.”

“Maybe I have. Maybe you’re just old as shit and don’t get it.”

This is when I showed him my diagrams, and then he knew. “So the numbers procreate,” he admits, finally.

“And that’s where numbers come from.”