What is the deal with the fish in this cup 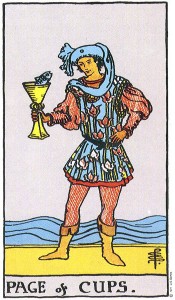 You can’t just go around carrying a fish in your cup. What, did you win it at Coney Island and the guy was out of plastic bags, so you emptied your Starbucks and were just like… this will do?! It’s madness. Give a man a fish, he eats for day. Give a man a fish in a cup, and you’ve ruined the fish, the cup and your entire day. Where does the fish go? Mixed recycling? Is a fish recyclable?

What is the deal with the five of pentacles 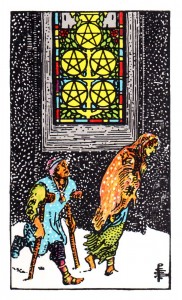 The church is right there! It’s right there, and they’re not going in. They’re actively avoiding their best interests!

These are the people who, when you’re at the airport, they sit in the departure lounge looking like this:

Jerry Seinfeld crosses his legs, looks nonchalant, and flips through an imaginary magazine

When they get on the plane, they’re suddenly surprised that there’s no room in the overhead compartment for their bags. Guys! You saw everyone with their bag, getting on the plane! You knew what the deal was!  Overhead compartments are this country’s purest form of social Darwinism, and I’m not about to overrule that. Your laziness has contributed toward your extinction. You’re like the Dodo, pal, and neither one of you is going to fly today!

What is the deal with the ten of swords 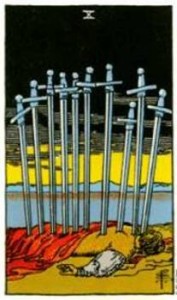 No one needs ten swords. No one really even needs two swords. I am suspicious of a person who owns even one sword. If you own a sword, you probably also own a snake, and people are forever referring to you as either “the sword guy” or “the snake guy”.

“Oh, you invited the snake guy?” “No, I invited the sword guy.” They’re the same guy, and neither one of them should be at a children’s birthday party.

What is the deal with the three of cups 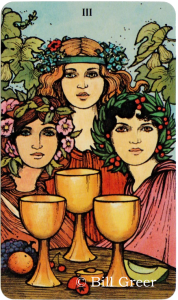 My wife sometimes invites her friends over, and you know, I like her friends. But have you ever noticed that when women get together, they always have one thing that the other one needs? It’s always “Marianne, I have this book for you,” or “Lucille, I brought you that lipstick”.

I don’t bring my male friends anything. I may occasionally buy him a beer, but even then I’ll get so embarrassed at the idea of buying another man a gift that I’ll just shove it in his face and just say “get me one next time.” What is that? Why can’t I buy my friend a present?

What is the deal with the Major and Minor Arcana 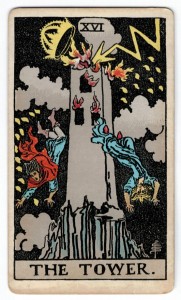 Is the Minor Arcana underage? Is the Major Arcana in the army? I gotta say, I’m uncomfortable about these two travelling around together.

What, what, what? Listen, some of you are probably parents, and I’m a parent, and I know for a fact that not one of you would be ok with your underage kids hanging out with an ex-army general whose key cards include “Death”, “The Hermit” and a picture of a flaming tower. Would you want your kids, hanging out with a lone man who heralds death and flames?

“Our daughter has gone missing. She was last seen with The Devil, The Hermit, and the lone spectre of Death, who actually refers to the end of a project or a way of thinking.”