Some Thoughts on Sophie and Vlad, the Secondary and Most Important Relationship in 1997’s Anastasia

If you’re like me, and I do hope you are, you spend an unusual amount of time thinking about the 1997 animated feature film Anastasia.

The film is remarkable, and I mean that in both senses of the word: it’s remarkably good, and remarkable in the sense that why, yes, they really did make a kid’s film about the slaughtered children of the Romanov family. You know, the guys who were forced into exile for several years, before being dragged outside in the middle of the night, along with their dog, to be shot to death before their bodies were dissolved in acid? No, it doesn’t scream family-viewing to me either, but nevertheless, someone at Fox animation wrote it and someone else commissioned it and we ended up with a film where Grigori Rasputin’s sidekick is a talking fruit bat.

And I’m glad we did.

One of the things that makes Anastasia wonderful – apart from the songs, and the work its done for the popular myth that Anastasia Romanov was un-killable and Rasputin was literally magic – are the side details. The refrain on ‘Rumour in St Petersburg’ (“but please do not repeat!“: so good, so Russian), the struggle to obtain exit visas (travel admin! In a children’s film! Sure!), Josephine Baker’s appearance in the virtually tuneless ‘Paris Holds the Key (To Your Heart)’. Great. But there is no more treasured side detail than that of the relationship between Vladimir, Dimitri’s partner in crime, and Sophie, the Dowager Empress’s cousin.

Here is what we know. Dimitri and Vladimir are looking for a way out of Moscow, and any way will do. Moscow, it seems, is primarily filled with people whose teeth and tongues are too big for their faces, and those with good bone structure must escape, now, today, as soon as possible. 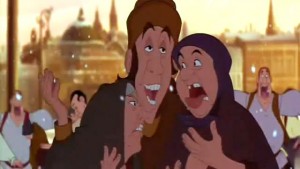 Dimitri has a real bee in his bonnet about finding a girl to play Anastasia, whereas Vlad seems a little more chill about it. Which, fine. He’s the leading man’s bumbling sidekick, he can afford to be chill about things. But it’s only once they recruit Anya and the trio are on their way from Moscow to Paris (1,715 miles, I’ll remind you) that we realise why Vlad is on this trip in the first place. Vlad is on his way to see Sophie.

“Sophie! My dear!” cries Vlad, prancing around the (German?) countryside with flowers in his hair, like Puck himself. “Vladdy is one his way!”

“She is a tender little morsel. A cup of hot chocolate after a long walk in snow. She’s a decadent pastry filled with whipped cream and laughter!”

Has anyone ever described you this way? Have you ever suspected that someone might, when you weren’t around? No: me neither. I am a 27 year old woman and I am probably as conventionally attractive right now as I am ever going to be, and no one has ever referred to me as a pastry filled with cream and laughter. Vlad, a man who is – what, 50? 55? – and has survived the Russian Revolution, and is risking his life to be with the woman he loves, or at least is happy to perform extended and gratuitous oral sex on. When was the last time he saw her? Under what circumstances did they part? He has forged exit visas and is walking across Germany (??) to meet a woman who he has not written to inform that he is coming. This is Vlad’s long walk in the snow. Whether there will be hot chocolate waiting is entirely up to Sophie.

But I digress. Upon arriving at what I presume is the Russian embassy (??) we are given a quick ‘fake-out’ scene. A sexy French maid opens the door, the kind that the feather duster from Beauty and the Beast turns back into, and Vlad greets her cordially. She is then violently dismissed by Sophie, who fills the doorframe with her body.

And what a body. Sophie’s body – generous forearms, big arse, milkmaid tits, hips out to here – is simply not a body that mainstream media, let alone children’s mainstream media, tells us to desire. Yet here she is, lusted after, adored, ready to be eaten alive by this man she hasn’t seen for – I’m gonna say a decade? A decade.

Sophie is a fat fortysomething Russian woman living in 1920s Paris in and she is fucking feeling herself. Believe the hype: she is a decadent pastry filled with whipped cream and laughter.

(ASIDE: I also fully believe that the maid character who Sophie violently shoves aside is the visual representation of a fight that happened in the writer’s room.

I am both insatiably curious to know what the deal is with Sophie and Vlad and absolutely delighted that we are never given anymore information. Context clues tell me that they are both former courtiers in Tzar Nikolai’s old palace, which, oh my god – what have these two seen? How did they survive? Who did these two jolly middle-aged sex-positive panda bears have to see put up against the wall?

Vlad is so sure that Sophie will still be waiting for him – no, not waiting, but expecting, to a certain degree, the way you always expect to see the people that you have suffered with again, as though tragedy magnetises you – because despite time and distance, he knows she will always be His Sophie. That is a big thing to know about someone that you don’t see for decades at a time.

Anya and Dimitri are young and hot, and their memories of the Revolution are scattered, grey. Let’s face it: if it doesn’t work out between them, it will work out with someone else.

Only Vlad and Sophie share a reservoir of pain that they have both learned to conceal with feckless, dangerous joie de vivre. Only they know what it is to get up and live again, despite everything telling you not to, to live in a world of pain, forever. I hope they took a house together, in Paris. I hope they lived long, snug lives. I hope when Stalin died in 1953, they clasped their dimpled 70-something hands together and said nothing whatsoever of the matter: I hope they went out for a pastry, instead.