The Brief, Perfect Meeting of Nigella Lawson and Angela Carter 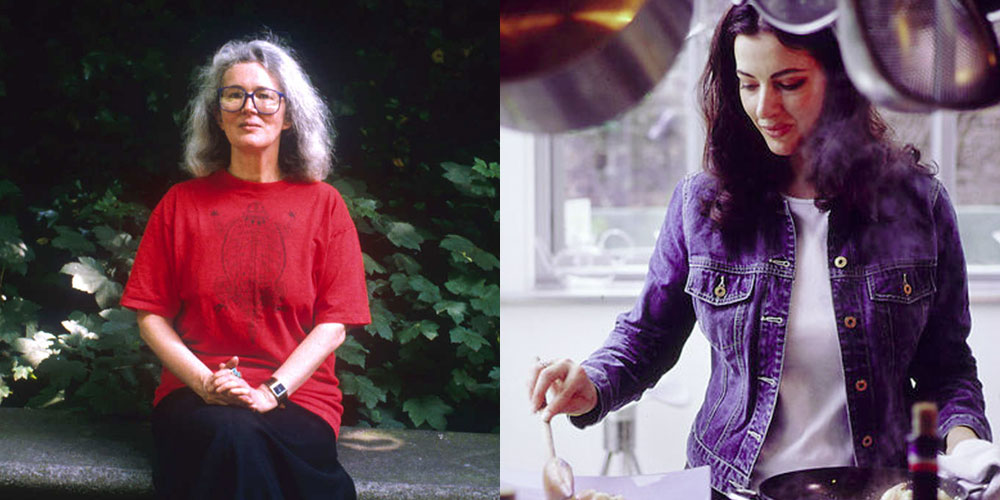 This weekend was significant for two reasons, the first of which is that I re-read Mallory Ortberg’s Things I Believe About Anna Wintour’s Affair With Bob Marley. The second is that I watched five episodes of Nigella Lawson’s At My Table, a TV show in which we are invited to watch Nigella eat, walk around her house, sit on her stairs in a kimono, and add spoonfuls of Aleppo pepper to eggs and yoghurt.

(The way Nigella says “Aleppo pepper”, incidentally, makes you remember that Aleppo wasn’t always a warzone, that it was a place where people had rugs and plates and specific jars of pepper, and this is where Nigella’s cosy poshness reaches the height of its power: she doesn’t just like nice things, she is a living museum of what nice things are)

Reading Mallory Ortberg’s Anna Wintour/Bob Marley slash fiction has given me a taste for imagined meetings, and pretended friendships, and the odd comfort that comes from having two people you admire coming together to enjoy one another. And perhaps that’s why, while I was falling asleep with Angela Carter’s Shaking A Leg: Collected Journalism and Writing on my chest, I suddenly sat bolt upright, determined to know whether Angela Carter and Nigella Lawson had ever met. I couldn’t find proof of it happening online, so I asked Nigella, and Nigella told me.

They did and they did

Nigella Lawson is a very busy woman and I don’t wish to bother her about it any further, and in any case, there is no Carter/Lawson encounter that is as precious nor as perfect as the one that exists in my head. It went a little like this.

– Angela Carter and Nigella Lawson met some time between the late 1980s and the early 1990s, when Angela was at the peak of her power, but not yet sick, and Nigella was a young freelance writer who was developing a reputation for throwing a good dinner party. They met in passing at a work event (one for “Women in Media” that they had both considered not attending) and both women knew exactly who the other woman was, but still said “I’m Angela, lovely to meet you” and “Nigella, a pleasure.”

– This first interaction was brief, but memorable. It included meeting eyes while someone was talking about “the future of women in broadsheet journalism” into a microphone, and Angela rolled her eyes in a “can you believe this fucking shit?” moment of shared irritation.

– “Why am I always inviting people to fucking lunch?” Screeches a half-dressed Nigella, whipping some egg whites into a pavlova, which refuse to be “satiny” despite multiple beatings. “I should cancel,” she thinks. “She probably hasn’t left yet. I should call her right now and cancel.”

– Nigella does not cancel but she does arrange her books very carefully as a way of letting Angela know that she very much gets what Angela is about. She hides The Magic Toyshop and Nights at the Circus because you can’t just invite someone over and be like “look, I’m a fan.” Can you? She dithers, then decides to leave out Wise Children, because no one ever talks about Wise Children.

– She adds The Complete Works of Colette to her hallway book pile and says that’s enough, and the The Feminine Mystique would be overkill.

– When Angela arrives, she is wearing an expensive camel coat paired with one of those plastic rain hoods you get from Poundland. It is exquisite.

– Nigella serves Angela a simple tomato salad that she learned how to make when she lived in Florence, the kind of salad that is everywhere today but decidedly not everywhere in the early 1990s. Angela calls the salad a “genre masterpiece”.

– Over their main course, Nigella makes one veiled, innocuous comment about Elizabeth David. In return, Angela gives Nigella the slow, cat-like grin of someone who has been nursing a wonderful resentment for years, one that has brought her profound joy. “That cunt,” she says, of Elizabeth David, the queen of English home cooking. “That absolute cunt.”

– By 3pm, both women are very drunk, and Nigella announces that she has never had sex with a woman, but she thinks that most straight women would like to, given the chance, in a no-strings sort of way. Nigella has never said this out loud before, because she thinks it might be a very shocking thing to say. “Well of course, darling,” says Angela Carter. “Of course.”

– It occurs to Nigella that nothing could shock Angela Carter.

– When it is time for the pavlova, Nigella is lightheaded from wine, and performs a partially-improvised, partially-planned monologue about how her coulis is a “ravishing blood crimson”, and her pav peaks are as “white as a Parisian gusset.” She is showing off, for Angela, but also privately thinks that this is how food should be discussed. Not with science and fussiness: but with passion, and drama, and intimacy.

– When it is time for Angela to go, they hug closely, say how this has been just enormous fun, and promise to do it again soon.

– They do not do it again, at first because they are busy, and then because Angela simply can’t.

– Nigella has suffered many tragedies in her life, and lost many people, but the loss of Angela Carter ricochets around her heart like a dropped thimble. She wonders, briefly, if she would have cooked anything differently if she knew that this was to be her only lunch with Angela Carter, and she reasons that she would not. Nigella does not believe in perfect food, but the lunch was perfect. Not for its absence of flaw, but because both women were the most themselves that they could be, in a point in time when one star was rising, and the other gradually, silently, falling.

– The lunch was all they would ever have, and it was perfect.